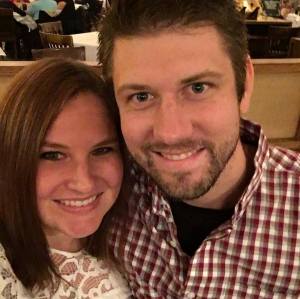 Our story starts long before we were a couple. We met in June of 2005 when my best friend married Stephen’s childhood best friend. We were both in the wedding, but the timing wasn’t quite right. We kept in touch over the next year and a half before Stephen came out to California to spend New Year’s 2007 with the above mentioned friends. The timing was perfect this time and we kissed at midnight and have been together ever since.

After a year and a half long distance, Stephen moved to California to be with me. Within a year, he made me the happiest girl in the world by placing a twisty tie on my finger and asking me to marry him (no, really, it was a twisty tie). I said yes immediately and got the most beautiful engagement ring ever.

Planning our wedding was a wonderful time in our lives (a lot of which is documented in the earliest posts on this blog) but all of it could not surpass the perfect day that was our wedding on April 18, 2010.

I couldn’t wait to become a Rabon for many reasons, but being able to change the name of my blog to something clever was definitely on the list!

Four months into wedded bliss, we relocated to Colorado, where Stephen is from.

In January 2014, we welcomed our son, Jonathan, into the world. Our family grew again in June 2018 when Abigail was born. Hannah completed the Rabon Hat Trick in December 2019. Life with three kids is hectic, but we’re so blessed to have them.

One thought on “Our Story”