We’ve been living in Colorado just over a month now and we’re pretty much settled in. We have somewhat of a routine (okay, so we have Young Guns softball every Tuesday night) and that helps. Things will really be much more “official” when I get a job. That unemployed boredom I mentioned last post as not having settled in yet? Yeah, it’s definitely settled. And making me slightly crazy. Or killing brain cells. Or both. I’ve been watching America’s Next Top Model marathons (which I love…but really…) and Say Yes to the Dress (which I also love). I have been reading a bit as well, so trying to get some brain cells back 🙂 I’ve put out resumés to a variety of places, so hopefully I’ll get a job soon. I just put in a resumé today for a job that I think I would be very well suited for and definitely have the experience to do well. I hope they think so too.

On Tuesday nights, Stephen plays softball with some of the guys that he also plays fantasy sports with. The Young Guns won their last game (the first winning game I’ve been to) and that was really great. The wives/girlfriends and I were going crazy! There have been 4 of us usually but we had 6 last game so we had a relatively large cheering section. I also joined a fantasy football league with them (we’re the WonderWoman league to the guys’ SuperMan league) and we had our draft on Wednesday. I had the number one draft pick, which kind of felt like winning the lottery. I have a really good team so I hope that my team will do really well my rookie season in the league.

Last weekend Stephen and the SuperMen went to Vegas and Sandi came to visit!! It was so exciting to have her here and have some normalcy from home. No offense to the really nice people I’ve met out here, but Sandi and I have been practically inseparable since we were 14/15. You can’t beat a decade of friendship and all that we’ve been through together: high school, college, marriage, and my little buddy Jackson. We stayed up until 3:15am the night she got here talking about anything and everything in the world.

We went exploring on Saturday and ended up at Garden of the Gods, Manitou Springs, Cave of the Winds and Chez Cirque Dueling Piano Bar. 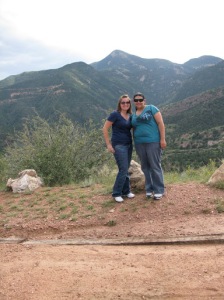 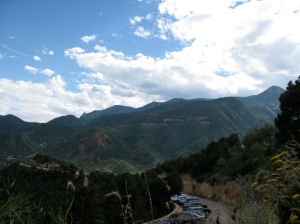 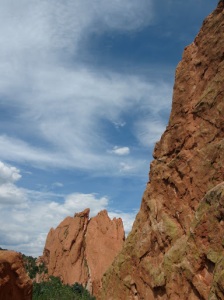 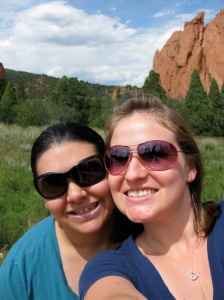 On Sunday before she left we went to the Columbine Memorial. It’s actually not very far from where I live at all so we stopped by. It was a beautiful area and the memorial was very moving. I was in tears practically the entire time. Going to a place like that reminds you both of how sad and dangerous the state of the world is but also how beautiful it is that there are people who are willing to put themselves in danger to help and protect people. To see how a community, a state, a nation can come together in times of tragedy to love and support each other. Tragedy really shows the worst in people but also showcases the best. It reminds me of a quote from a speech on the West Wing that I saw just last night (Stephen and I have been watching it and just finished season 3. I love it. I never thought I would since I’m not very political, but I do.) The context is included in the quote:

“More than any time in recent history, America’s destiny is not of our own choosing. We did not seek nor did we provoke an assault on our freedom and our way of life. We did not expect nor did we invite a confrontation with evil. Yet the true measure of a people’s strength is how they rise to master that moment when it does arrive. Forty-four people were killed a couple of hours ago at Kennison State University. Three swimmers from the men’s team were killed and two others are in critical condition, when, after having heard the explosion from their practice facility, they ran into the fire to help get people out. Ran into the fire. The streets of heaven are too crowded with angels tonight. They’re our students and our teachers and our parents and our friends. The streets of heaven are too crowded with angels, but every time we think we have measured our capacity to meet a challenge, we look up and we’re reminded that that capacity may well be limitless. This is a time for American heroes. We will do what is hard. We will achieve what is great. This is a time for American heroes and we reach for the stars. God bless their memory, God bless you and God bless the United States of America. Thank you.”

Hopefully by the next time I update I’ll be gainfully employed. I’ve been praying hard for it, so I have faith that the right job will come along and I’ll get it. God has always provided before.

One thought on “September Already”