It’s the word that sums up the last seven months. Jonathan has brought so much joy to our lives and the lives of those closest to us. His smile is infectious and his giggle is probably my favorite sound in the entire world. No one makes him laugh like Stephen does, and my heart overflows when I can hear Jonathan laughing with his daddy upstairs from the main floor. He’s an easy baby, as babies go, though he does have his moments of fussiness. But even when those times are trying, one smile erases the frustration of trying to use logic on an infant.

The look on his face when I walk into his room in the morning — yes, he is now sleeping in his own room — is one of unabashed love. It’s that smile, that coo, that love, that has made transitioning him to his own room work so well. We made the decision that he needed to move to his crib in his room, instead of the pack-n-play in our room, just over a week ago. I wasn’t getting much sleep and Jonathan seemed to be regressing a bit. Stephen thought we should move him to his room, I think mainly for my sake. After reading online about the various methods of sleep training, we decided to go with the “cry it out” method. I know this is controversial and that there are so many people who would condemn us as the lowest scum in the parental pool. That said, my parents let me cry it out and I turned out mostly okay.

I’m a firm believer that you should do what works best for your family and your baby. If you’re not comfortable with it, maybe it isn’t the method for you.

So, we gave it a shot. And it worked wonderfully. We decided to establish a more concrete bedtime routine so that he could get used to what came next. So: bath, Bible, breastfeed/bottle (if for some reason I’m not home at that time), bed. Admittedly, the first night was a little tough. We put him down with hugs, kisses and “I love you” from each of us and left the room. He sort of explored his crib a little and fell asleep. Then, about 2:30am, he woke up crying. This is where the video monitor we were so generously gifted by my former coworker came in clutch. Knowing that if I went in to see him, he would probably only get worse (he was used to nursing when he’d wake up in our room, another habit we wanted to break), I was able to watch him. This gave me the reassurance that, although crying, he had not hit his head or gotten a limb stuck in the side of the crib. After 40 minutes of crying of various degrees, he fell asleep. And slept until 7am.  The next night, he cried for 10 minutes when we put him down, but then slept straight through the night (I didn’t, I woke up at 2am convinced I heard him crying but he was sleeping peacefully). And every night since, he’s gone down, fussed for less than 10 minutes and then slept peacefully through the night. I’m sleeping through the night now too.  Stephen and I get some time alone in the evenings now, which makes us both very happy.

Even after that first hard night, I went into his room in the morning to a happy, calm, loving baby. I think that was God’s way of reassuring me that letting him cry during the night before didn’t teach him that we don’t love him or that he’s alone in this world. As a mom, those little “winks from God” are so valuable to know you’re doing a good job.

Our sweet boy continues to be a little explorer. Now that he’s crawling, he wants to see and experience everything. As a parent, there’s nothing quite like watching your little one take in and process the world around him. He’s realized that can open dresser drawers, decorate the room with movies from the shelf and make his swing move with the click of a button. He’s loved trying all the foods that I’ve made for him. He’s had apples, peaches, pears, butternut squash, sweet potato, green beans, peas, carrots, prunes and bananas. I just got some avocado for him to try as well. He is eager to eat solid foods, but still nurses and has formula too. I let him have a piece of pear the other day as I was making his purées. He wanted to eat it, but it was too slippery to stay in his hand. He was able to shave off a bit with his two bottom teeth, though. He had a cracker at my friend Marcia’s on Monday and was able to hold that much easier, though I’m pretty sure more ended up on his shirt and the floor than in his belly. I’m excited to add more finger foods to his expanding palette.

He is playing more independently now, which is actually what is allowing me to write this blog. He’s got a play area downstairs where we have toys out for him and plenty of space to crawl. He has to be watched closely still, as the house has not been baby proofed, but it is so fun to watch what he decides to do. We took him to the park not long ago and he was fascinated by the grass. I’ve heard of many children who don’t like the feel of grass, but he couldn’t wait to get off the blanket we laid out for him and explore. 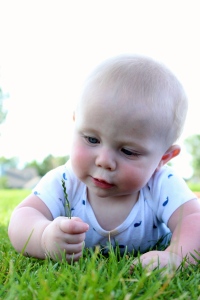 I’m so thankful to be his mom. Experiencing the world a second time, though his eyes, is incredible. Knowing that these first experiences will shape his understanding of the world is amazing. I am so excited for the rest of the year, especially with the holidays approaching. We have the unique opportunity to make family traditions that will be with him (and any future siblings) his whole childhood and might even be passed to his children someday. What a glorious and precious time is upon us!

One thought on “Seven Months”