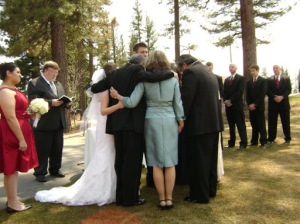 The CEO of the school that I work for writes a daily devotional that he sends out to the parents and staff. He always writes about things going on in the lives of his family and friends and relates them to a lesson or scripture. Here is what he wrote the day after our wedding and I wanted to include it here because it meant so much.
————————————————————————————

Ephesians 5:25 “Husbands, love your wives, just as Christ loved the church and gave himself up for her”

We went to a staff member’s wedding today in Tahoe. It was glorious in so many ways. We realized on the way up that the boys had never been to a wedding! While they didn’t know what to expect, we did hear Nicholas whisper to Connor, “I’m not sure exactly what happens, but I do know they have cake.” They were in for so much more.

A setting like Tahoe, with snow in the mountains and a glorious lake as a backdrop, is hard to surpass. In this case, however, the ceremony and reception did top even the beauty of the surroundings. The marriage ceremony was subtle, moving and superbly spiritual. The bride and groom took their first communion together as husband and wife and they looked wonderfully in love at all times. As beautiful as it all was, when the parents of the bride and groom came up to form a prayer circle with them, I was in awe. The Holy Spirit was truly at work in every heart in attendance. When I spoke to the DJ, he told me that although he wasn’t a practicing Christian, he was touched by the time of communion, the time of prayer, and the music chosen for the ceremony. He said that something had opened up inside of him. I said, “Welcome to the feeling of the Holy Spirit.”

There were so many wonderful moments today, but one that certainly touched us was when the groom’s brother, and best man, gave his toast. He is three years younger than his brother, just as Connor is to Nicholas. When he spoke, it was what we would certainly love to hear from Connor about Nicholas some day. He remarked that he had always followed his older brother’s footsteps and had yet to find the path in error. He also told of how lucky he was that he was guided and cared for as he grew up and what a great man his brother had become. In so many ways we heard the relationship of our boys being defined.

Today was such a glorious day in so many ways, but it was also a reminder of how important it is to pray for our children. I have been to many weddings but never have I felt the presence of God like I did at this wedding. There was no doubt how much these two love each other and yet, as evident as that was, their love for God was even more obvious. This wasn’t a day all about them like so many weddings… this was a day about their love for God and their gratitude to Him for bringing them together. After today, I am going to make it a real priority to pray for the future spouses of my children. I want for each of them the joy and love I witnessed today.

There is so much more that I could write about, but suffice it to say that we participated in a first for our boys, a wedding that will be indelibly etched into our minds. A wedding performed in his beautiful land and guided by the Holy Spirit…

Congratulations Amanda and Stephen, and thank you for including us in your blessed day!

One thought on “Special Moments”