Because I couldn’t come up with a cleverly alliterated title for a post on a Wednesday that included the following items:

For those keeping score, we’re now on March 1, which means February’s No Social Media Saturdays is over. It was mostly a success. I say mostly because though I did successfully avoid Facebook, Instagram and Twitter on Saturdays in February, I did accidentally open the apps on my phone often out of habit. I would open them, yell, and close them as fast as I could (I actually threw my phone once). I think I may have alarmed my husband once or twice. I tried to find an app for my phone that would block them from midnight-11:59pm on Saturdays, but none of the free ones I tried seemed to work right. Thankfully, I had some busy Saturdays in February, which made this challenge a little easier: Beauty and the Beast at the PACE Center on 2/4, a friend’s baby shower (plus a little over an hour drive time there and back) on 2/11, friends over for dinner and catching up on 2/18 and projects around the house on 2/25. Overall, it was good. I spent that time doing things with people I love and reading, something that I’ll discuss in the next point.

March is No Starbucks, which should be especially easy since we are on a Whole30 right now and that means no sugar or dairy, excluding almost everything on the menu that I actually enjoy.

2. What I’ve Been Reading Lately

In my last post I mentioned reading The Happiness Project again. Since finishing that, I have started The Year of Small Things. First of all, how pretty is this cover? 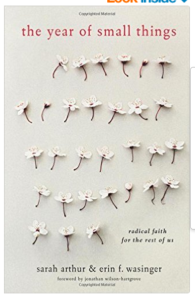 This book was recommended by a friend from high school, who is also a talented writer and blogs over here. I’m a little over halfway through the book, but I’m really liking it. There have been a couple of passages that I just loved, including this one that I shared on my instagram: 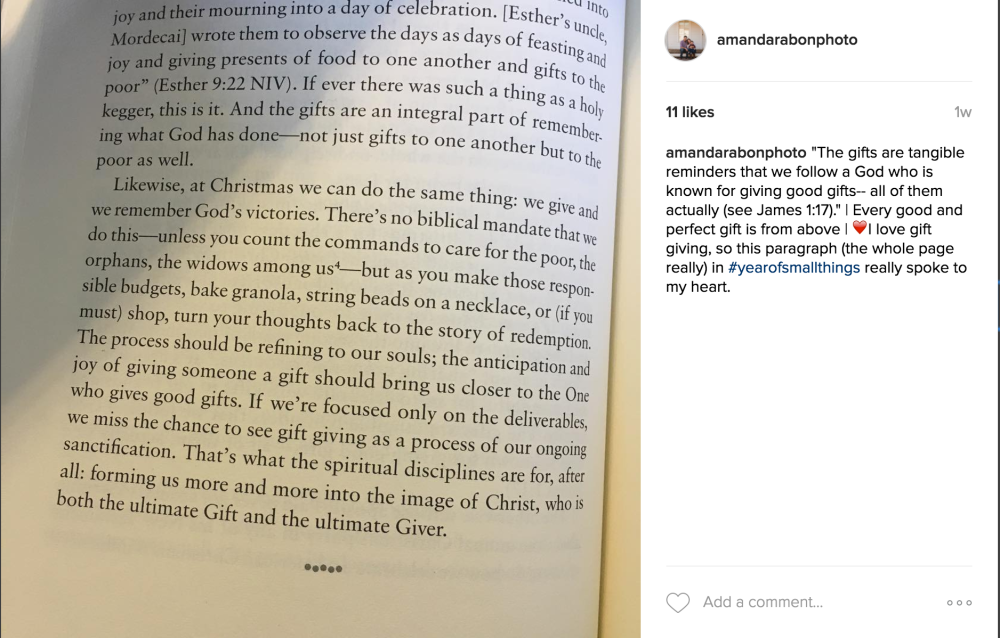 There’s a lot of good stuff in there. While I may not begin adhering to New Monasticism, there are so many things in this book that get me thinking and stir something in my soul. I’ve been contemplating a lot of the general themes of the book and how I can apply these ideas in my own life.

Here we are at the halfway point of our 4th Whole 30 – our first was in September of 2014, then September-October 2015, and then a failed attempt in April 2016. Looks like we’re on pace for doing it once a calendar year. Stephen and his best friend have been doing a no alcohol challenge since October 15, with an end date of March 15. Stephen suggested that we finish his challenge with a Whole30 so he can be basically as healthy as possible come March 16. With this being the halfway point, it’s all downhill from here. A few new things we’ve tried this time:

And tonight, this Slow Cooker Chicken Tikka Masala that smells great and I can’t wait to try.

I picked up this app called Good Morning for funsies about a month ago (free version). It claims to analyze your sleep patterns and will have your alarm go off when you’re in a light sleep instead of REM sleep (within a 30 minute window before your set wake up time) so that you wake up feeling refreshed. I can’t really say that it’s legit because I often turn it off and go back to sleep, but the noise is significantly less annoying than my clock alarm and the sleep cycle stuff is interesting. In fact, every Sunday night, I get less deep sleep than any other day, which explains why Mondays are so rough!

We just tore through 3 seasons (Netflix) of Marvel’s Agents of S.H.I.E.L.D. and have started catching up on the current season in like a month. It’s good. What I like about the Marvel movies and this show is that they are fun – this isn’t The Dark Knight taking itself super seriously. They know they’re a show about superheroes/aliens/crazy tech and they embrace it. We’re trying to watch everything on this chart made by c|net:

We haven’t watched them 100% in order, but it’s fun to see how they all fit together.